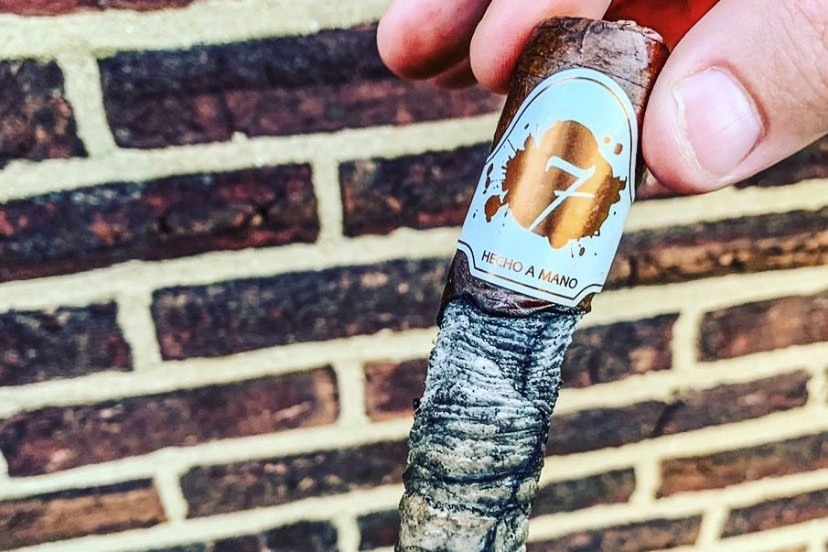 How Far Down Should You Smoke A Cigar?

If you turn to “cigar etiquette” sources, you might have heard you should never smoke more than half a cigar (downright ridiculous, if you ask me). Another common “rule” is that you should set your cigar down and let it burn itself out (not snuff it out) when three finger-widths are left, measured from the end.

Of course, that really only matters if you are smoking in the company of people who care more about arbitrary and rather questionable rules on etiquette than they do about reaping all the enjoyment they can out of a good stogie. You pay a lot for your cigars, so you should be able to enjoy them to their fullest!

There really are no hard-and-fast rules on how far down you can smoke your cigar. A lot of it depends on the cigar in question, as well as your personal tastes. Some cigars get hot and harsh well before you reach the nub. Some of those cigars you might very well want to abandon before you even get halfway through. Others, like El Septimo Cigars, taste great right to the very end, and with those, you may very well decide it’s worth the risk of burning your fingers to take it down to the nub. With time and experience, you’ll know which cigars you’re able to burn down all the way.

WHEN A CIGAR “TURNS”

Think Of Your Cigar In Three Parts:

The first part is warming up the cigar, where you will be burning off any unwanted flavors from the match or butane torch, while desired flavors will begin to develop.

The second third will normally be the best-tasting part of your smoke, where the draw will be at its optimum, and you will be picking up a variety of flavor profiles.

Finally, you will come to the final third, and this is when you may experience unwanted flavors which are normally caused by the build-up of oils and tars from the tobacco. The flavor of your cigar can begin to change and get bitter, or somewhat. That moment is referred to as when a cigar ‘turns.’ The oils and moisture accumulate and taint the flavor of the cigar, as the cigar becomes generally stronger and sometimes hot and crude towards the end. If you don’t enjoy this, you can put out your cigar.

If you’re smoking a longer cigar like a Churchill or a figured shape like a Torpedo, the concentration of heat and oil can be more intense as you get past the halfway point. If oil and moisture build up at the end of your cigar and constrict the draw, you can cut a little more off to loosen it up and keep smoking.

However, if you’re really enjoying the cigar, you can always smoke it down to the nub – but beware of burning your fingers! For many premium cigars, including an El Septimo, the intensity of taste that arrives toward the end is welcome, possessing smooth leathery textures and flavors of peppery spices. Lots of connoisseurs like the surge in flavor and strength just before a cigar is finished. With experience, you’ll be able to instinctively decide when to stop. Nevertheless, if you’re in a formal setting consider letting the cigar go sooner rather than later.

WHEN TO PUT OUT YOUR CIGAR

• When It Starts Tasting Bad – As long as your cigar provides a desirable taste and aroma, keep smoking it. A good cigar should be satisfying, not something you have to suffer through. If the flavor becomes bitter or overly intense to the point where you feel unwell or nauseous, then maybe it’s time to let it go out. This could be due to the cigar smoking too hot and causing bitter notes. To fix this, you can either stop smoking or purge your cigar to keep smoking. To purge a cigar, you need to gently blow through the cigar, rather than puffing on it. This should help to clear out the cigar and remove some of the bitter oils that have built up. If you don’t notice any improvement in the flavor, then let the cigar go out.

• When Your Cigar Is Too Hot – If you’re pinching the end of your cigar and its incinerating your fingertips, you could be in harm’s way. You can risk dropping a hot cigar butt into your lap or burning a hole in your favorite sweater. However, a cigar like an El Septimo becomes so irresistible at the end, it’s worth living dangerously for a few minutes.

• It Gets Too Small To Hold – If it is getting uncomfortable to hold the cigar as it gets towards the end, then stop smoking it. Unlike a cigarette, there isn’t a filter at the end of a cigar to hold on to, so you can easily burn your mouth if you continue to smoke a cigar until it’s down to an inch or two from your mouth. However, if you would like to enjoy the cigar right down to the nub, then you can use a cigar holder or roach clip to get the most out of your smoke.

HOW TO PUT OUT YOUR CIGAR

You don’t have to take the band off your cigar before you light it. Cigar bands identify what you’re smoking and often show off gorgeous and intricate imagery. We suggest leaving the band on until you’ve gotten past the halfway point of the cigar. That way, the heat from the end of your cigar loosens the adhesive on the band and you can safely peel it off without the risk of tearing part of the wrapper leaf in the process. You’ll definitely want to take the band off before it starts to burn if you plan to smoke your cigar until the bitter end. As beautiful as many cigar bands can be, the band won’t improve the flavor or aroma of your cigar if it starts burning with the wrapper leaf.
When you do reach that fateful moment when there’s either nothing left of your cigar, or it’s too hot or too intense and you have to let it go, remember to let your cigar expire gracefully. Don’t smoosh it out in the ashtray. Remove the band (if you haven’t done so already), and set your cigar in the ash dish. It will burn out on its own without the need to mash it into a smoldering mess.

So, there are clearly no hard or fast rules when it comes to extinguishing your cigar based on how long it is, but you can use common sense.
Some cigars will start to get hot and harsh well before you reach the nub – it’s those cigars you might want to abandon before you get even halfway. On the other hand, there are others that taste fantastic right to the very end, making it more than worth your while to perhaps burn your fingers and savor that last draw.
Through time, along with trial and error, you’ll know which cigars taste great to the very end and which ones are better to not smoke all the way through.