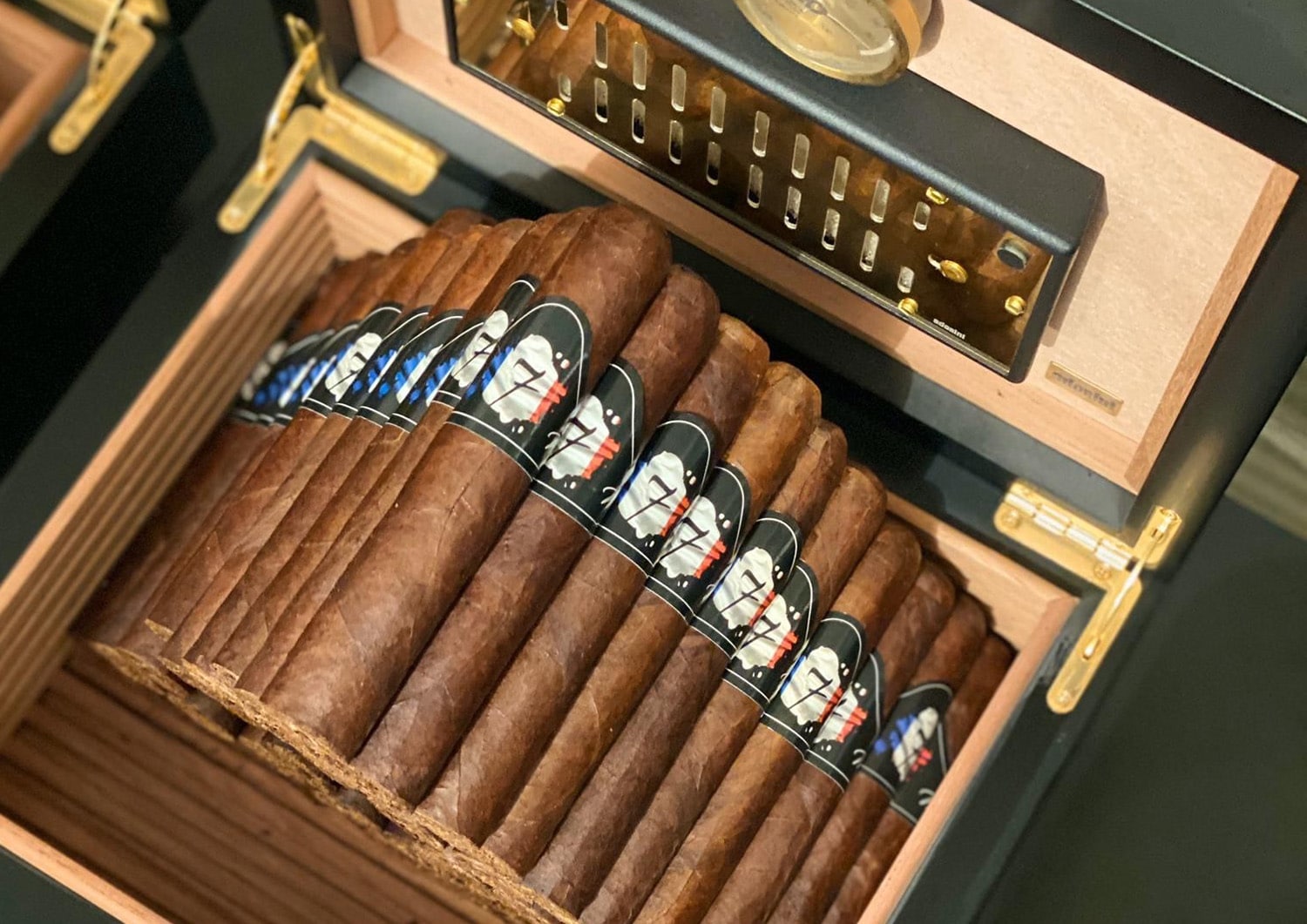 The Ultimate Guide On Storing Your Cigars

Just like fine wine, a premium cigar’s quality may be spoiled by improper care. For cigars, this typically means controlling the proper humidity, temperature, and care for your cigars. Unfortunately, many new smokers don’t know how to store cigars properly, and as a result find their premium cigars to be dry and tasteless.

When a cigar dries out, it loses most of the oils that give it its flavor. The result is a bland, harsh, unpleasant smoke. Keeping a cigar fresh means storing it at the optimal conditions of approximately 70% humidity and 68 degrees Fahrenheit. 70% humidity is the optimum point where your cigar will remain moist, but not too moist where it burns poorly and becomes overly spongey, moldy, or may even burst when it gets too hot.

In general, you can expect a cigar to stay fresh outside of a humidor for about three days depending on the average humidity of your region. If you plan on smoking a cigar shortly after buying it, proper storage isn’t much of a factor.

If you need more time but don’t want to invest in a humidor, there are other options. One of the most common methods is to simply improvise a humidification device out of a sponge or a paper towel. Put your cigars in a plastic bag or airtight food container. Put a damp sponge or paper towel in the bag with them, and seal it up. The airtight container will seal in the humidity from the sponge or towel. Surely this is not the most elegant solution, but it will get the job done.

If you keep more than a few cigars at any given time, it is probably worth investing in a proper humidor. Humidors create a sealed storage environment where you can control the exact humidity. The humidifier in a humidor takes distilled water and disperses it throughout the container to create the ideal 70% humidity level. The material of choice for a quality humidor is Spanish cedar due to its moisture-regulating qualities, which helps to ensure that cigars are stored at a consistent humidity.

Before use, your humidor needs to be seasoned. This means that the wood needs to be exposed to moisture in order for the humidor to function as intended. To do this, simply take a new sponge and wet it with a liberal dose of distilled water. Wipe down all the exposed wood, including any trays and dividers, and the interior lid. Avoid using a paper towel or a cloth as they will behind leave a paper trail on the wood. After you’ve wiped down the wood, squirt the sponge with more distilled water, then place it inside the humidor on a plastic bag to avoid direct contact with the wood, and close the lid.

Next, prepare your humidification device according to the manufacturer’s instructions. Use only distilled water as tap water contains minerals that will destroy most humidification systems by leaving deposits that will clog the humidor element. Once the humidification element is filled, be sure to wipe it down to remove all the excess water. Rest it on a hand towel for approximately 30 minutes.

Close the humidor with its humidifying element and the damp sponge and leave it overnight. If the humidor is fairly dry the following day, add more distilled water. If it is very damp, leave it alone. Let the humidor sit another night and then remove the sponge and plastic bag. The walls of the humidor have now absorbed all the water they need, and you can now safely store your cigars.

STACKING CIGARS IN YOUR HUMIDOR

The best way to stack your cigars in your humidor is by placing the subsequent rows in the cleft between each cigar in the row below. This allows for better airflow throughout the humidor.

For example, let’s say the bottom of your humidor can accommodate a row of 20 cigars. By placing the cigars for the next row between the spaces where the cigars line-up, you would be able to place 18 cigars in the second row. You can probably get 19 cigars in the third row because you will now have a little extra room. Keep in mind that not all of the cigars may be exactly the same size, so rows may vary. Finally, be sure not to pack your humidor so tightly that you’ll have to pry the cigars out with a crowbar.

ROTATE YOUR CIGARS IN YOUR HUMIDOR

To rotate your cigars, carefully remove the cigars from the bottom row and move them to the top row or tray. While you’re doing this, some of the cigars in the middle rows may slide down to fill-in the gaps, and that’s fine as long as the cigars have moved from their original position. Rotating also allows you to inspect your cigars for chips in the wrappers, unraveling, mold, plume, and beetle holes.

Remember that a cigar has many layers of tobacco. Therefore, it is disastrous for the various layers to become moist or dry out at different rates. For example, if a cigar is placed in a hyper-moist environment and then taken out of that moist environment, the outside dries and shrinks while the inside is still swollen, and the cigar splits open.

If your cigar is too moist, there is a chance that you can dry it out. This tactic, however, will greatly depend on how damp the cigar is. When a cigar is exposed to too much moisture, the cigar will expand and appear chubby behind the ash because it is accounting and holding all of the additional moisture in the air. That being said, when you go to dry out a damp cigar, the body of the cigar is going to shrink, the wrapper will be loose and could rip, and the composition of the cigar itself will fall apart when you attempt to smoke it. One way to attempt to dry out an overly moist cigar is by regulating the RH (relative humidity) at a lower setting, like 50% to 60%, and going back up from there to your preferred RH.

As for mold, there is little that can be done to save moldy cigars. The best thing to do if you notice mold blooms is to discard the affected cigars before they spread to others. You’ll also want to empty your humidor and give it a good wipe down with a dry towel for good measure.
Lastly, you can rehydrate an overly dry cigar by placing it in a properly managed humidor for at least six months. Slowly, this will make it moist enough to smoke, but unfortunately, it will never be as good as it once was again. Once the natural tobacco oils are allowed to dry out, there is no way to get them back again.

Keep in mind that cigars rolled in Connecticut wrappers, which are more on the dry side, will have a much harder time replenishing their moisture, and depending on the severity of the dryness, may not come back at all. On the other hand, El Septimo Cigars, which have oily Maduro wrappers and oily Ligero fillers, are the best candidates for restoration.

Ultimately, mixing cigars of various blends and wrappers has no known effect on the character or flavor of your cigars. Just be sure to never mix cigars when you have a combination of traditionally-blended smokes and flavored cigars, or infused cigars like ACID Cigars. The moral of the story: Store your cigars well, check them regularly, and they will always be faithful…Now that you are sure to be storing your cigars properly, it’s time to enjoy your El Septimo Cigar!